A Few of Gail's Child-Raising Regrets

There are many things I never should have done; and looking back, can't believe I did . . .


Maybe/hopefully there is something you can glean from my mistakes.


In order of recollection, I 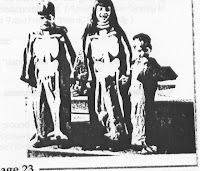 I want to tell you a little story about one of those times when I was overdoing the obvious. Heidi and Mike and their children were moving to California for his orthodontic school. I had done my usual "do you have his...and do you have that..." and they were all enduring me quite patiently.
Finally they were all in the crew cab (needed so it would hold the two adults, two toddlers, and the parakeet); the car was on a trailer behind the van; tears were streaming down my face and Heidi's face; uncles and Papa were suddenly clearing their throats, and the little ones didn't quite understand the 2400 miles ahead of them and why we were crying when they got to take this great trip "riding way up high in the big truck."
Then, I just had to say something. . ."Is the back door (of the truck) closed?" All but Mike groaned. Mike got out of the driver's side, in what everyone thought was one final effort to humor his mother-in-law, and walked to the back of the truck.
He sheepishly closed the back gate and locked it. My over doing it was finally, after all these years, vindicated and the tears of sadness changed to tears of laughter as they pulled away from the curb. Yes!!!
In spite of all of these things all six kids survived, and still even talk to me.
Tomorrow I'll tell you about a few of the things (I think) we somehow managed to do right.  In the meantime, please check out this past Monday's post and help me out. Pleeeze.

At least you made costumes! And yes, I wish I had saved scraps for quilts too!