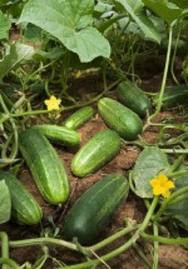 
Our garden has been doing great. As a result I have been searching out new recipes for common produce.
Among the "amazing" things I found were many almost identical posts heralding the wonders of the cool cucumber for its various health and household cleaning powers. Most fell in the too good to be true category so I went to Snopes to check them out. They rate them  "undetermined."
Along the way I happened on the post of another blogger who wrote that her earlier Snopes inquiry showed the jury was still out, so she took it upon herself to check out the 13 purported miracle workers.
She found that most didn't live up to the hype.


In large pot, melt the butter and saute the sliced green onions until soft. Add the remaining ingredients except the sour cream. Let the soup simmer for 20 minutes or until the cucumbers are soft. Pour the hot soup in a blender and puree it. Return to the pot and whisk in the sour cream. Serve immediately as a hot soup or chill thoroughly and serve cold.


Creamed Cucumbers
This recipe is fun to play around with. Adjust the spices and the done-ness of the cukes to suit your taste. It seems lend itself to many variations.


Melt the butter or margarine in a skillet. Saute cucumbers until they begin to shine. Stir in the cream,  a couple of sprinkles of nutmeg, and salt and pepper to taste, stirring constantly over low heat. Add the dill and or chives. Serve warm.


Cucumber Lime Cooler
No cooking this time --- just blend, chill and enjoy.  We really like the pulp in this refreshing drink but if you don't, you can strain the mixture before serving.


1 cucumber, peeled and cut into chunks
Juice of two limes (or to taste)
1/3 cup sugar


'til we eat again,
I am Simply, Gail