Remembering When Food Was Slow . . .

I had just finished writing my last post when I opened my e-mail and found the following from my sister-in-law Diane. It seemed totally appropriate to follow the serious with the hilarious --- especially when the ages matched! Many thanks to the original author.

A young person recently asked me  "What was your favorite fast food when you were growing up?"

"We didn't have fast food when I was growing up," I informed him and continued

"All the food was slow."

"C'mon, seriously. Where did you eat?"

"It was a place called 'at home,'" I explained.

"Mom cooked every day and when Dad got home from work, we sat down together at the dining room table, and if I didn't like what she put on my plate I was allowed to sit there until I did like it."

Note from Gail: When our kids were growing up we had a chalkboard prominently and permanently on display. It read 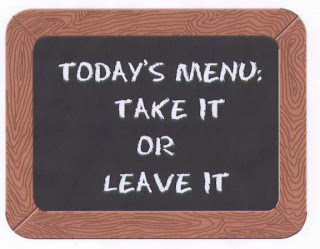 By this time, the kid was laughing so hard I was afraid he was going to suffer serious internal damage, so I didn't tell him the part about how I had to have permission to leave the table.

Here are some other things I would have told him about my childhood if I figured his system could have handled it :

Have things changed? "Tune in" next week, same time, same station, to learn more about the author's Memories from a Friend and . . . a short quiz on same.