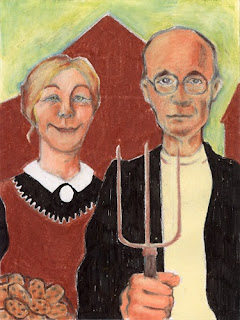 It is summer! Our garden is thriving and we have just picked our first handful of peas and three cherry tomatoes.


It is the perfect time for Dave and I to   once again recommit ourselves to    healthier eating.


Last August 18th my post listed four of my favorite books.  One was a tiny book Food Rules: an eater's manual ---- full of wit and wisdom for healthier eating.   For details click  http://thecreativecheapskate.blogspot.com/2011/08/i-love-to-read-and-have-enjoyed-these.html

This past week I discovered the new, expanded, and cheerfully illustrated version of the same. Michael Pollan is the author; Maira Kalman, the illustrator.

The first Food Rules . . . was hatched from Michael's  hunch "that the wisdom of our grandparents might have more helpful things to say about how to eat well than the recommendations of science or industry or government."


"The deeper I delved into the confused and confusing thicket of nutritional science, sorting through the long-running fats vs carbs ward, the fiber skirmishes and the raging dietary supplement debates the simpler the picture gradually became....


"Nutrition science got started less than two hundred years ago...and is today approximately where surgery was in the year 1650---very promising, and very interesting to watch but are you ready to let them operate on you?


"Populations that eat a so-called Western diet --- generally defined as a diet consisting of lots of processed foods and meat, lots of added fat and sugar, lots of refined grains, lots of everything except vegetables, fruits, and whole grains --- invariably suffer from high rates of the so-called Western diseases: obesity, type 2 diabetes, cardiovascular disease, and cancer....


Maira's illustrations are simple and thought-provoking.


While Michael Pollan refers to them as rules, he says they are really personal polices --- not hard-and-fast laws. Heavily processed foods present risks to our health and those he prefers to call "edible food-like substances."

The book is divided into three sections:

I. What should I eat?  (Eat Food)
"Edible food-like substances, are highly processed concoction's designed by food scientist consisting mostly of ingredients derived from corn and soy that no normal person keeps in the pantry, and they contain chemical additives with which the human body has not long been acquainted. Today much of the challenge of eating well comes down to choosing real food and avoiding these industrial novelties."

Rule #14 - Eat Only Foods That Will Eventually Rot


II. What Kind of Food should I eat? (Mostly Plants)
"Instead of an eight-ounce steak and a four-ounce portion of vegetables, serve four ounces of beef and eight ounces of veggies."


Rule #30 - Eat Animals That Have Themselves Eaten Well


Rule #38 - Eat Sweet Foods as You Find Them in Nature

Rule #55 - Stop Eating Before You're Full


His rules have short explanations when needed - many stand alone!  He is not saying we should not have occasional treats but rather to "treat treats as treats." He asks that we give some thought to where the food we are about to consume came from.

Rule #4  states
Eat All the Junk Food You Want as Long as You Cook it Yourself  - because we would eat a lot less if we had to take the time to prepare and then clean up after the preparation. . .

Michael Pollan states  "Enjoy these treats as often as you're willing to prepare them --- chances are it won't be everyday."

Included in last August's post  is another book that helped us along our path:  "Twinkies Deconstructed"  It is a easy and fascinating read---and you will think twice before ever eating another one.  (None of the ingredients are "real" and several are actually GRAS (generally regarded as safe) by the Food and Drug Administration!!! I did find a recipe and made them myself.  And, while good, they weren't worth the effort.

We found more "help" in the documentary Food, Inc. and the latest pink slime disclosures.

The food manufacturers and processors do not keep coming up with "edible food-like substances" for our well-being although they present them as healthy alternatives that save us valuable time.


Whether you have your own garden or not, summer is a great time to get on the path to healthier eating.
Hopefully the excerpts from this book have encouraged you or at least intrigued you enough to give the food you and your family eat the consideration it deserves. Check out farmer's markets, co-ops and local vegetable stands.

Food Rules . . . are simple suggestions and I am
Simply, Gail