Years ago when Dave would be on an occasional  long outing with one of the kids he would stop and buy a can of soda pop for them to share.  It was shared because that is what our budget allowed. That shared pop became a shared memory---a priceless memory. 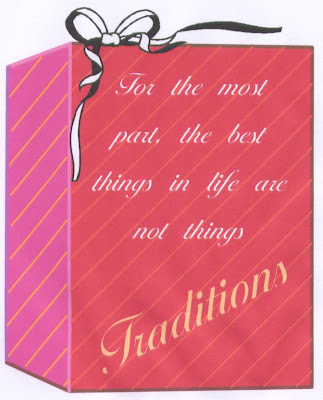 There are many things you already do or can begin to do that bind the family together. Most of these things are very simple and quite inexpensive---even in the area of time commitment.

That was poignantly brought home to me with Jeremy's simple response to this past Monday's post.

Since this is the holiday season, I will talk about holiday things that have become priceless memories for our family. If you are in a financially comfortable position, that is terrific; money pressure is one less thing you have to worry about but...., and it is a very very important but---

In the overall scheme of things, no matter how well off you are financially, it is important to remember that, for the most part, the best things in life are not things.


My dad was born on an army post in 1910. For his first Christmas he was given a glass bugle ornament.          As I was growing up, he was the one who put that bugle on the tree. When it was damaged somehow, it was patched the best it could be. He was killed by a drunk driver 20 years ago and that Christmas my mom sent me that wonderful and still patched ornament.  I am now the one that hangs the bugle on the tree.

Hopefully I have listed something that sparks a new idea for you. All of the above are simple things because . . .
I am Simply, Gail